It felt good to be able to experience, first hand, a program which I played a small part in creating. It was such a fantastic feeling to see it come to life after watching those who made it possible work so hard during its creation. Science Sundays in the Park is a new environmental education, writing-based program being piloted by the National Park Service. It is a collaboration between the National Writing Project and the National Park Service. A few parks were selected to participate in the pilot, only being given the basic goals of the program and told to be creative in bringing it to life.  Each park teams up with a local chapter of the National Writing Project and a local elementary school who wishes to have students participate in the program. For Delaware Water Gap National Recreation Area (DEWA), the local chapter was Pocono Writing Project and the school was Resica Elementary. The main goal of the program is to develop students’ writing skills while encouraging them to think like scientists and explore the world around them. National Parks offer a great setting for this type of self-guided, exploratory learning.

When I first came on as a Community Volunteer Ambassador (CVA) for Delaware Water Gap National Recreation Area (DEWA) I was immediately put in charge of mentoring a college intern, Jane, who had come on a few weeks ahead of me. Jane was attending East Stroudsburg University (ESU) as an Outdoor Recreation major and had a strong interest in environmental education and working with youth. Each intern from ESU, as part of the internship requirements, must complete a “special project,” something that they personally take charge of as a contribution to whomever they are completing their internship with. For Jane, Science Sundays seemed like a very natural fit, and she took it on with all the fiery passion you would expect from a young college student being given their first opportunity to showcase what they can accomplish. She really owned that project.

Jane completely took charge of the Science Sundays project and made the program her own. She was given some examples from our supervisor of a youth program she had helped launch at Olympic National Park, and I provided her with the “Project Wild” environmental education book and encouraged her to take ideas from these sources, but to really take those ideas and use them to create her own. She seemed to take that advice seriously, and her creative mind certainly assisted her in laying out some fantastic learning workshops for the fourth graders from Resica Elementary. She would come to me to talk through some of her ideas, or to ask about age appropriateness of the activities, but for the most part she was very independent. 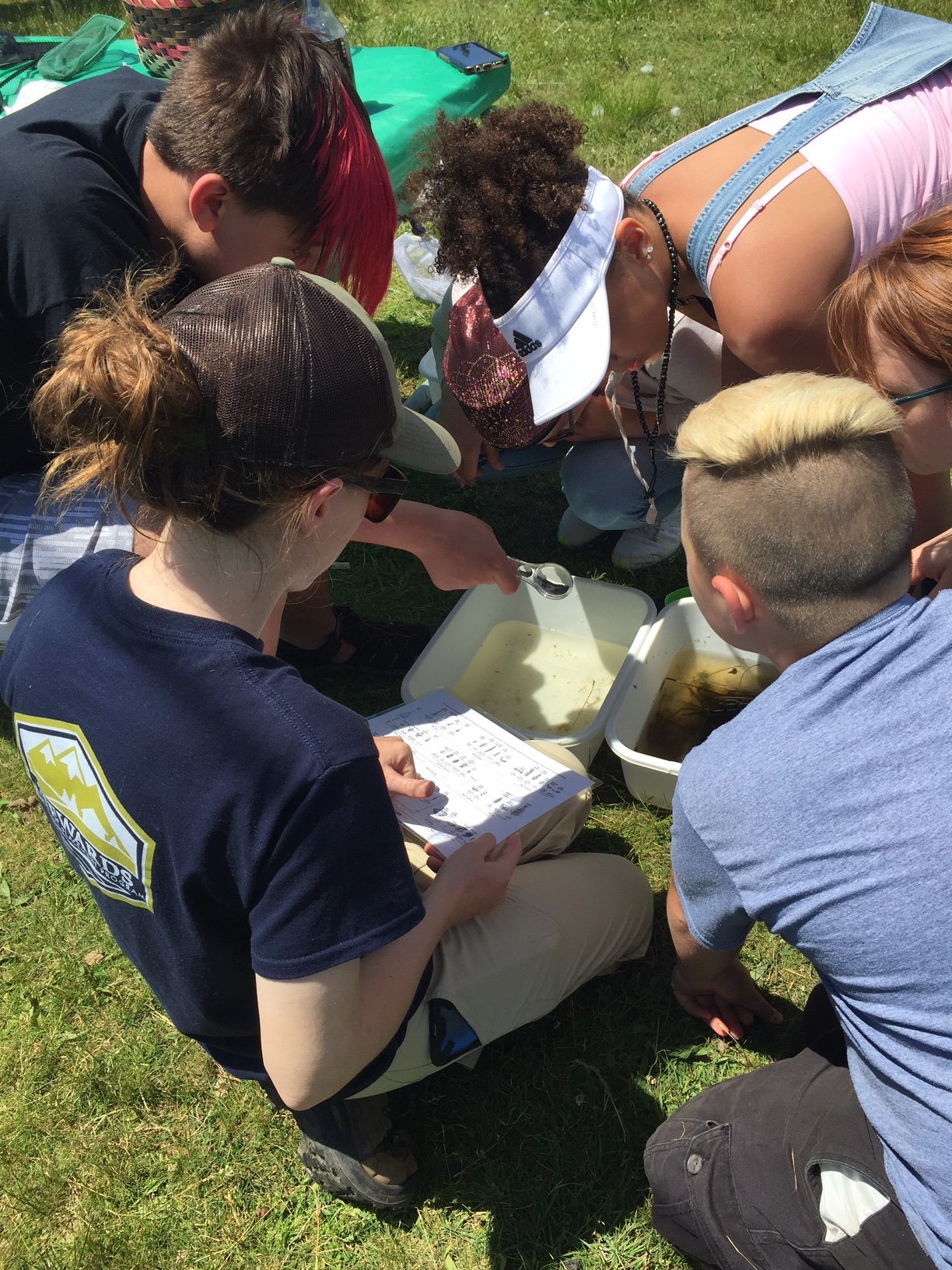 On June 9 I was finally able to get my first look at this program in action and work with the fourth graders from Resica who had been coming to the program for a few weeks. It is set up as a “drop-in” program, so that the kids and their parents can show up at any time from 1:00 – 3:00 and complete the activities at their own pace. There are generally 4-6 stations, each with a unique activity that relates to the “theme” for that week and the theme changes each week. This particular week was “Water, Water, Everywhere” and clearly the focus was, well, water. The students check-in at a welcome table, get their backpacks (filled with useful materials like pencils and magnifying lenses) and their writing journal. As they rotate through the stations, they receive a stamp at each one after completing the activity and answering the accompanying writing prompt. The stations this week were Evaporation Station, Micro-invertebrates, Macro-invertebrates, Abiotic Factors, The Water Cycle, and Reflection. There is always a Reflection Station.

I worked at the Macro-invertebrates Station, where I helped the students scoop up muck from the nearby pond, dump it into a bucket, and pick out all sorts of little critters (macro-invertebrates being living things with no backbone) and collect them in a separate bucket. Once the student(s) were satisfied with the number of creatures collected, I would help them identify them using a dichotomous key. The students seemed to really enjoy the activity, looking for the creatures and wondering what they had found before we identified them. I would explain to them that scientists can use macro-invertebrates to tell them about the health of the water they find them in. Each critter has a certain tolerance to pollution that it is able to live in. Some of them cannot stand any pollution, some can take a lot, and many fall in-between. After identifying the macros, we would discover their tolerance levels and discuss what we can deduct about the water from what we found. Their writing prompt focused on the last part; what could they deduce about the water, given the macro-invertebrates that they were able to find? Overall, I saw the program as being very successful. There were 24 students signed up to participate in the program, and most of them have been coming every week. They also bring their siblings along. It was really nice to see the students and their families coming out to the park, to sites they would probably otherwise never go to, and enjoying the resources while learning about the world around them. It gave them opportunities to think creatively and critically about their surroundings. The students seemed to enjoy themselves too, which I found impressive, since they were being taken out of their normal weekend routines to do a school-related project on a Sunday. If you can get fourth graders to feel good about that and create those positive memories at a National Park Site, I think you can consider yourself successful.